Words from the Director

Words from the Director

“I’m genuinely excited to share this film. Couldn’t be prouder of the artistry of everyone who worked on the film. It’s certainly a story that couldn’t be more relevant to this moment in time.”
— John Harrigan

Imagination, belief, the sacred and spiritual are all inextricably linked. Where one person experiences a vision, dream or idea, another might encounter contact from aliens or angels. 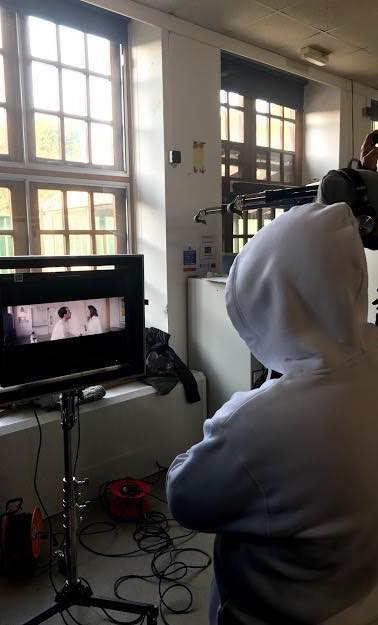 Who decides? Should we be permitted to define our own interpretation of reality?

Subjective truth is debated endlessly and consensus reality appears to be slowly disintegrating, dismantled through the new ways in which we interact and experience the world through the prisms of social media and other portals of meaning which we don’t wholly control.

The solid world we once inhabited, now appears as a dream….

The visions Eve transcribes in her journal are taken from the book Remembrance by Maryann Rada, a celebrated UFO contactee. When I was asked to adapt her book, I wasn’t sure it was even possible. As I read Remembrance, I recalled the conversations around Naked Lunch by William S. Burroughs and the debate on if it was possible for Cronenberg to adapt into a film. Naked Lunch was once believed to be a book that could never be translated into film. I was also reminded of the quote “If it can be written, or thought, it can be filmed.” Stanley Kubrick

The aspect of the film that I’m most satisfied with is how the screenplay encapsulates, protects and presents passages from Remembrance as the visions Eve records in her journal. This is how Maryann records her own interactions with entities she believes to be alien: through hundreds of journals, she writes and records her experiences of contact and communion, spanning decades. Eve’s journal allowed me to create a screenplay that was respectful to the transcendent nature of Maryann Rada’s work, whilst not being subservient to the source material as gospel. It was important to me as an artist that both the audience and I be allowed to explore the material on our own terms. The power of our interactions with what we believe to be sacred is in our permission to interpret what it means to our lives.

Lightships allowed me to explore and evaluate my own questions on the nature of how humans have recorded encounters with what they believed to be gods, angels, aliens and the creative idea since time immemorial. Are the sacred and religious nothing more than our dreams run amok, or is the answer even more interesting than the question? Perhaps the truth exists beyond human concepts of true or false.

When we explore the realms of our imagination through creativity, art and storytelling, do we commune with worlds beyond our own?

I’m deeply proud of Lightships. My talented collaborators and I have created a puzzle box; a film that invites our audience to decide for themselves the true nature of Eve’s reality. Like all the best stories, it is a mystery that I’m still unravelling for myself.

Perhaps God is a detective, investigating the true nature of his/her creation on his/her own terms.

Who Is John Harrigan?

Happy to be able to share the trailer for Lightships, my third feature as writer/director. Adapted from the book Remembrance by the incredible Maryann Rada.

Lightships is a film that emerged before the global pandemic, but now in retrospect, it appears prescient. I had no way of knowing when I completed the screenplay in January 2019 just how much of the story would come to shadow our experiences in lockdown during a global pandemic less than one year later.

The masks the patients wear are a haunting reminder of the often prophetic power of film and art, to give strange form to things yet to come. Like the visions that make Eve question her reality, Lightships is a fever dream that I don’t fully recall making.

The intersecting worlds of Maryann Rada and Philip K. Dick. Great seers who are attempting to help wake us from the Black Iron Prison.

“We are trapped in a dream of our own making. PKD writes, “We are in a kind of prison but do not know it.” Becoming aware of our imprisonment, however, is the first, crucial step in becoming free of it. One of the main terms PKD coined to describe wetiko is the “Black Iron Prison” [BIP]. PKD writes, “The BIP is a vast complex life form (organism) which protects itself by inducing a negative hallucination of it.” By negative hallucination, PKD means that instead of seeing what is not there, we cannot see what is there. In PKD’s words, “The criminal virus controls by occluding (putting us in a sort of half sleep)… The occlusion is self-perpetuating; it makes us unaware of it.” Being self-perpetuating, this occlusion in our consciousness will not go away of its own accord; it acts as a feedback loop (in PKD’s words, “a positive feedback on itself”) that perpetually self-generates until we manage to break its spell. PKD writes, “the very occlusion itself prevents us from assessing, overcoming or ever being aware of the occlusion.”

From this article, posted by John here

Lightships allowed me to explore and evaluate my own questions on the nature of how humans have recorded encounters with what they believed to be gods, angels, aliens and the creative idea since time immemorial. #lightshipsfilm Click To Tweet