Mysteries of the Nine's Path Seal

When I decided the time had come to consolidate all the work undertaken thus far on behalf of the League of Light, to move it all to one website, I realized that there was no unifying image. The site needed one. As I have done since I started working with the Pleiadians, I let myself be guided creatively by the cosmic muse. And, it would seem, by sacred geometry. Meet the Nine’s Path seal.

The Road to Nine’s Path

Rewind a moment. Back in 2008, when I started posting written transmissions from the Pleiadian Renegades on the Opalescent Words blog (now collected in the book Remembrance), I began development of a website. I saw a need to bring together that original blog with the also-in-development Garden of Unknowable Things blog, and my personal blog, Bends of Light. The transmissions were so popular, garnering more than 10,000 views a month, that a social meeting place and centralized beacon of sorts seemed appropriate. Thus was born the first real website, Speaking of Nine. I didn’t build that site myself; rather, I was given the gift of having a designer do the work, based on my nascent understanding of what was happening with the League of Light and my part in their mission.

Soon, that website needed a total reworking, so I learned the basics of Joomla! (a platform for website development) and built the next iteration, Opalescent Nine, complete with a forum and video library. Over time, the mission morphed, new blogs came into being (such as Anica’s Notebook and Changing Address), and my relationship with the LOL shifted. So did the nature of the work I was doing with them. The writing I had been doing, they neatly informed me, was going to be coming to a point of shift. I had already published 5 books with them, and they had other work for me to undertake. All of this, I see, is in tandem with a greatly overarching plan for this world, and if what was needed from me was to downshift in the amount and style of writing I was doing, so be it. I’m here for serving the big plan, not for my own popularity.

Just at the time when the structure of the Opalescent Nine website began showing some cracks, I went through a major overhaul myself. I saw an opportunity to move the site to the WordPress platform and started working on that, behind the scenes. Needing a more user-friendly (i.e., easier to spell) name, I rebranded the site Nine’s Path. During my downtime, I reacquainted myself with my old deck of tarot cards, and started doing some readings for myself, family, and friends. As usual, the Pleiadians, just over my shoulder, pointed out that this was a new tool for sharing their work. If I was willing, they said, they would create a new mode of reaching the world through the archetype of tarot (read more about that here). So Nine’s Path had a different perspective altogether from the Opalescent Nine site, as the forum was proving too much for me to handle alone anyway, and a complete redesign had to be done. Thus, the first version of Nine’s Path happened to come about: grand, sprawling, complex of sites with several points of focus.

In the middle of 2018, again I was told by the crew that the time had come for another shift in my work with them. The weekly Pleiadian tarot readings continued, but the message in the books would be transformed into film. Read about the development of Lightships, based on Remembrance, here. In anticipation of this shift, and what would follow as the world careens toward a point of great awakening, it became obvious that the complex of sites would have to be consolidated. Upleveled. Thus, also in need of a logo.

How the Nine’s Path Seal Came to Be

I was already using the numeral 9 as a symbol for the site. As a standalone, it worked pretty well, but as the project of rebuilding the site became more than just renovation, it needed something more. I shifted into branding mode in my creative mind, something I was familiar with from my pre-LOL career days in corporate marketing. Playing with the 9 and the word “Path”, I thought maybe some stylized version of 9 and P could work together. I knocked it around a while and just didn’t come up with anything, until… I saw that flipping the 9 resembled a capital “P”. I moved those around on the computer screen and to my surprise, I saw the present arrangement come together. The moment that happened, I swear I almost felt the gates of heaven open, light shine down, angels sing. I saw a way to loop them on layers so that they hooked into each other, and voilà, done.

There’s a kind of sacred geometry inbuilt into the shape of 9’s spiral, echoing the action of Nine, as you can read about in Lesson 1 of the Science of Nine. Read further on this page to decode the design of the Nine’s Path seal…

Obviously at first look, the Nine’s Path seal looks like a heart. And obviously, at the core of the teachings of the League of Light, of Nine, is love. This is the first level of understanding.

While originally, the reversed 9 on the left side of the symbol was meant to take the place of the capital “P” from “Path”, it also represents the opposite of 9. Here, one could go down that road of “Nine has no opposite”, just as one could play with the ideas of the opposite of love… there isn’t really an opposite of Nine. There is, however, a force that works in apparent opposition to the unifying, healing, somewhat magical activity of Nine, which is in the work of the LOL called Nemesis. Their writings are filled with discussions of Nemesis. Most simply understood, Nemesis is that which challenges the approach to love. If you look at the Nine’s Path seal, you’ll see that the 9 on the right has pulled the 9 on the left into a loving whole, perfectly balanced, a zero-point of unified singularity.

Within the center point of the symbol is a vesica piscis, itself a powerful and ancient symbol which is extensively discussed in topics from ancient esotericism to modern gnostic and new-age circles (no pun intended).

Stepping back a bit, seeing the symbol as a whole as a face, you could see a pair of closed eyes, as if you’re looking at a stylized picture of a person meditating. Seen thus, the vesica piscis takes the place of the third eye, wide open while the meditating eyes are closed.

Thus, the Nine’s Path seal brings together a union of opposition into a new whole, universal forces entwined in perfect zero-point balance. As such, it gracefully and powerfully carries the essence of what Nine’s Path and the work of the League of Light is all about.

I’m sure more insights will reveal themselves. Such is the way of the Pleiadians, I have learned. More will always become known. As I look at the symbol now, I wonder if there is some connection with a completion of the caduceus, peace in balance, unity resting therein. Do you see anything notable in the design? If so, please comment below!

Coming soon: Silver pendants hand-crafted by a master artisan in the form of the Nine’s Path seal. Stay tuned. More information is forthcoming.

Copyright notice: Nine’s Path and the logo design are trademarks of the work of this website and copyright © Maryann Rada. Please respect the integrity of this site and the work contained herein.

Also read about the League of Light insignia 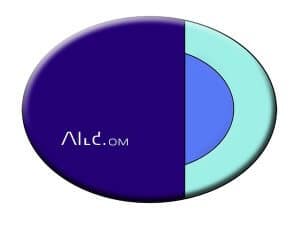 As a complement to the Nine’s Path seal, the insignia for the League of Light also has a lot of meaning embedded in its design. Read about how it came to be here.