Nemesis: Teacher, adversary, healer, friend. Ultimately, the one who holds the mirror you are reluctant to see into, who leads you to points of integration, fearlessness, and deeper knowledge of love. Get an idea of who Nemesis can be through these depictions from some of the League of Light’s writings:

“Nemesis”, from Garden of Unknowable Things: A Renegade Pleiadian Lexicon:

Not a joyless personality, nor opposition without mercy, as popularly conceptualized. Nemesis has a greatly misunderstood hazy nebula of carefully perverted nonsense about her. As she was known to be by children of ancient days, codes are seen. Of her nature, understand her to be a patient teacher, and demanding of your full attention. Like a single-minded taskmaster (emphasis on “master”), she steers you toward experiences that make you aware of your own imperfections, mirroring them in the people, events, and situations which you “randomly” encounter. Keeping you centered on what you would rather ignore does make her seem a little less appealing than if she let you run amok, but she honors the request of your soul, not your ego. Nemesis is more friend than foe.

From the chapter “No-Name Nemesis: Nine’s Secret Agent” in Remembrance: Pleiadian Messages in Preparation for Contact:

How do you handle things when they don’t work out the way you want them to? Do you curse? What or who do you curse? Have you ever thought about exactly the direction of the energetic noose as you hurl it? It might surprise you that there is some force there to catch it, some entity that takes shape in the recesses of the mind, a shadowy figure we like to call Nemesis. Nemesis can take the shape of any person, situation, or form you can imagine. Her impressive array of alter-egos is staggering to say the least. You have met her many times in your sojourn on Earth, and you will meet many times again, before leaving this earthly existence and seeing things from outside the matrix once more. Our advice to you: Don’t get freaked out when she shows up unannounced. It’s just her habit to get things moving with a little surprise now and then, and she means no harm by even the most formidable expressions of shame, guilt, horror, or indignation. She merely invites herself in for tea and has a visit to let you know you have a little work left to do, then she’s off while you do the tidying up.

Nemesis can appear as a nasty boss, a forgetful memory, a teenager in trouble with the law. She can take the form of a traffic jam, a pink slip, or a bad case of the flu. It’s not unusual for her to sweep through a huge landscape as plague, war, or disaster, nor is it unusual for her to be in the news as the big information gap that leaves no trace of reason for her activity. Her motivation is simple. She shows up at the bidding of your soul to let you know that the universe is paying attention to you, and that the stakes are high for the environmental impact you are about to make on the cosmic field of play. Nemesis is, at heart, a friend of your soul, thus not to be feared, but respected as a teacher, elucidator, and catalyst for transformation. She is no stranger to love, either, as love is her driving force, no matter how horrible her appearance may be. Her story is an interesting one, as it relates to the most interesting points in the story of your life. She hides in clever and unexpected ways, just as cleverly uncloaking herself to reveal a bit of Nine’s magnificent shine.

From the chapter “Nemesis” in Core Matrix Change: Insight for a New Conscious Unified Visioning:

Because you have been allowed to become acclimated to the misery and suffering of this world, we have to explain known facts in a way that will help you to release certain pathways of understanding which lead into circular thinking or meaningless niceties of reason. What we have seen in the engagement of Nemesis is, for the most part, full of overtones of fear with an undercurrent of rage. What you fear is the thing that Nemesis takes her cue from when she prepares her appearance for you. Each individual encounters Nemesis in exactly the form which best forms a balanced counterpoint to the particular fears that person has developed and accepted over the course of time, even lifetimes. Fear transcends limited memory and when it shows up without an apparent cause, you call it “irrational.” In fact, the root cause of such a fear can be embedded in the amnesia of former life lines in other times. Fear persists until it encounters its own nemesis, at which point love raises its ennobling natural presence, and fear dissolves. When you encounter Nemesis in any form in your personal interactions in such a way that you notice physio­logical changes, be on the lookout for love. This is the end of fear’s hold on you, and the point at which Nemesis drops her mask, but so often this last step is aborted in the reality of fear’s sudden recollection. Be aware, and don’t let this empower­ment elude you any longer. The more adept you become at recognizing love’s presence in moments of fear, the less prominent and troubling will you see your physiological responses become, to the point where they disappear altogether. At this point, you could consider that fear to be conquered.

From “The Order of Divine Drama Is a Comic Space Story” in Opalescence: The Pleiadian Renegade Guide to Divinity:

Silly human you are not, but blind and without understanding. Pick a spot to clear the debris away from so you can get a better view. Soon you will be nicely aware. A simple change in how you benefit those around you by allowing your natural and censored senses to remember how you really are will do the trick. Once you are able to look in a mirror, your bindings fall from your eyes and you can see what has been in plain view all along. What was before you, behind you and within you become as love intended. Nemesis is love as God intended, which is pure and untainted by illusion. You are launching yourselves into a new reality when you allow Nemesis to crowbar your eyes open. Facts are that love is made into all things, that I am hard to shake as a teacher, and that you are sacred to your core. You create harmonies with your thought waves that alter the harmonies in your surrounding sleepwalk reality. Rather than saying that God grants you life within the confines of a world of limitation, it would be more correct to say that God lives, limited only by the confines of your mind. Facts: God is more fatherly to you because you need to heal the wounded father; love is more physical to you because you need to heal the heart of reality wounded by creating pain; and sanity leaves a lot be to desired by one who has lost everything to come live in the insanity of a world run by lunatics sapping strength from a sodden, world-weary tribe of renegades. Nemesis heals memory by largely erasing it, reintroducing the memory to itself as it was as events were being recorded on it. Nemesis is the Ghost of Christmas Past, Present, and Future; it is Roswell revisited; it is none other than you yourself now visiting you yourself then. I am in your dreams and your waking awareness. I am children of wounded adults. I am OM playing dress-up with you. Nemesis is not your enemy; it is the enemy of ignorance. Love is happily waiting for you to notice it coloring a picture for you in shades of wishes. Later, maybe, you will be able to see. A slow process is unfolding quickly now. In half a lifetime you have experienced both that which is a dead length of “Sergeant, yes sir” and “Hell no, we won’t go.” Up until now, any other option has been certain grief, ending in a dead silence. Now, however, is when all options are open to you for exploration and creative re-Nining. What will you do? Bemoan nothing and embrace love with your whole being. Embrace everything as love being. Love and embrace all beings. Mafias are keeping an eye on everything no longer. Act from your heart without your mind determining what is politically expedient. That is the weave of Six. You are the weaver of Nine. Let knowledge grow and crippled no longer be. I am Nemesis. Keep up the good work.

Further your appreciation of Nemesis through these pages:

Contributed posts by guest writers at this time of transformation. See all the contributed articles.

About the alchemical design of the Nine’s Path Seal:

“Most simply understood, Nemesis is that which challenges the approach to love. If you look at the Nine’s Path seal, you’ll see that the 9 on the right has pulled the 9 on the left into a loving whole, perfectly balanced, a zero-point of unified singularity.”

Sometimes, it helps to have a higher perspective in deciphering your personal map.

Nemesis can appear as a nasty boss, a forgetful memory, a teenager in trouble with the law. She can take the form of a traffic jam, a pink slip, or a bad case of the flu. #ninespath Click To Tweet 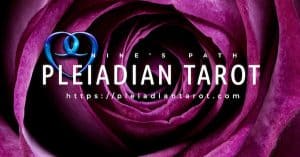 Dancing with Nemesis: Every week, Pleiadian tarot offers targeted guidance on dealing with Nemesis in your own life, whether it’s what’s going on in front of you or getting a better understanding on what’s happening on the world stage. Discover what Pleiadian tarot is, unique to Nine’s Path: A weekly conversation with the Pleiadians that hits home in the heart, illustrated with archetypal images that reach deep into the psyche. See how the readings build, week after week, developing themes and illuminating your path.

Weekly messages are posted every Thursday, with midweek updates the following Monday. Click here to see the latest messages, and to learn more about this fascinating, practical, and precious tool.

Subscribe above to stay up to date via email, or here for the newsletter:

A Pleiadian Bedtime Story
from the book Opalescence

The Pleiadian language Saren is full of light. Explore the online dictionary.