Lightships Is Moving Along

After 6 weeks of shooting in the bleak midwinter, John Harrigan dove into the editor’s cave and started doing the magic he’s so adept at. Recently, he emerged, with the first edit of Lightships for viewing… just for the critical eyes of those in the core filmmaking crew, a necessary step in getting ready for prime time.

All I can say is “Wow!” this is going to blow people’s minds. For many reasons. Not only is it breaking new ground by taking initial form from my book Remembrance, it’s moving into bold new territory as a piece of filmmaking. It’s new. Powerful. Painted in big colors with energy and depth.

Like all the work that comes through the auspices of the League of Light, it’s transformational, even in this early stage of post-production. Those of us who watched it were shaken… then stirred. This film, though it’s not yet complete, is already touching people very deeply. Shifting awareness. It’s going to be an evolutionary experience to be reckoned with, when it comes to screens in its final form. 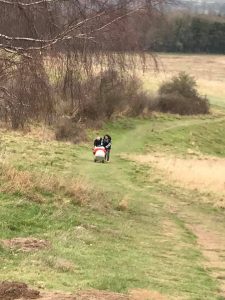 Photo (click to enlarge): Director John Harrigan helps sound recordist Paolo Frasão Costa push equipment uphill for an on-location shoot. I’m in awe of this team’s dedication to John’s vision, and his regard for the Pleiadians’ vision.

For more production images of the film, visit Lightships Instagram. Follow @foolishpeople on Twitter for more behind-the-scenes from Lightships and more of John’s work as a filmmaker. Find more links to other aspects of the project below.

On to the Next Phase

Now John’s back in the cave, having had a breather between the first edit and the next phase of the project. I’ll let you know how the next edit comes along as I get news. Suffice it to say, we’re all eagerly anticipating the next iteration.

One thing’s for sure: Lightships is going to carry a lot of people into new territory.

Check out John’s work as a filmmaker here

First edit of Lightships, based on the book Remembrance, is done. Though it’s not yet complete, is already touching people very deeply. Shifting awareness. #lightshipsfilm #ninespath #pleiadian #pleiadianfilm #pleiadianmovie Click To Tweet