The Video Machine Is Running Again: A Techy Inside Look

While I did study video production and film in college, that was just before avi became a thing, when we were still using machines like this: 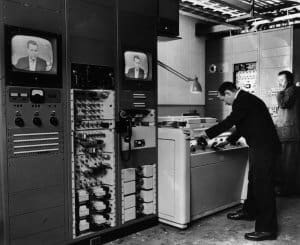 Just kidding. It was during the late 1980s, the golden era of MTV, when magnetic tape was the medium for the magic. When it comes to digital, I’m self-taught, tech-wise.

I’ve just revved up video production again, after discovering the new tricks this recently acquired used computer (a great big late-2013 iMac) has been waiting to show me. I had to upgrade from a tiny laptop (13″ screen) to a desktop if I was going to keep this mission moving forward, and wouldn’t you know things just “happened” where I could get a nice setup through eBay. Not only is it bigger and faster (not making me squint to see what’s on the screen), it came with the latest version of the updated video-making software I had been using. Took me a little time to find it and get everything (4 websites) organized to the point where I could refocus, but now that’s happening and I couldn’t be happier with the results!

For those interested, I’m using Final Cut Pro X. I love it, very intuitive and a grand step up from the basic iMovie I had been using. The “new” computer also has PremierePro and AfterEffects. After putzing around with them, I realize they’re not really suited for on-the-fly creations, more for deeper work and my schedule just doesn’t accommodate that. FCPX does everything I need and more, easy peasy.

The first thing I did was to create an intro and outro to use on new videos. I wanted to use the one I had on some recent Luminous Dimensions video (with Alex Beroza’s “Emerge in Love” music), but for the life of me I cannot find the raw files on the old laptop. That will have to be recreated from scratch, which means I’ll probably end up reformatting the video portion of it. We’ll see how that goes. In the meantime, for freshness’ sake, I did a search for some new music and found something that I (and apparently the crew) feel is perfect: “Guests from the Farthest End” by Synthaurion. It seems to capture the confidence and optimism of closer contact with the Pleiadians, something we’re all going to be getting more used to. I see so many people talking about their experiences; it’s really already happening on many levels.

Curious techies, I use Audacity’s free app to record and optimize the spoken word, then tweak in FCPX. Audacity makes it easy to edit out coughs and sneezes, barking dogs, slamming doors, and general outside noise. As I don’t have air conditioning, sometimes I have to come to a reasonable balance between being noise-free and having the window open so I can breathe.

I’m taking a wide-open approach to making videos at this point. Besides being available (when I can find some relative quiet around me) for direct voice transmissions, I’m also being directed to specific messages from the collection of blogs and books to read from. I have been told by the crew that soon we’ll be working in video in a slightly different way. More news on that as it develops. In the meantime, if anyone reading this is interested in transcribing the voice transmissions so I can post written versions of them, I’d be grateful for the help. Please contact me if you’d like to type any of these up.

If you’ve explored the YouTube channel connected with this site, you’ll find several collections, some of which are direct voice transmissions from various sources within or connected to the League of Light. It’s been some time since I’ve had these communications, and while I and a lot of you have been hoping Asket would make an appearance, it seems the first new voice transmission is coming from the League of Light, in what sounds and feels like Anica‘s voice. I love her visits, don’t you? The Irish lilt, the moments of humor, the deep gentle love… so I direct you to the latest of these, “Holding On While Letting Go”:

Yes, that’s Sean Connery. I like to keep things interesting, and relevant, and was mulling over my options for pairing the powerful message with images and video clips. Rather than putting together random things, which does work sometimes, I want a more coherent experience for you. After all, the video portion of the message is of course supposed to simultaneously heighten and give depth to the experience of receiving the transmission, for you. So… I found this movie, which is in the public domain, and it’s perfect. Not only was it perfect for the video, it’s perfect for the world right now, and paired with the LOL’s spoken message, it’s a whopper of an experience to give yourself at this point in our shared history. Lots of fun to look at this… but deeper, the message challenges us to deal with the hard stuff we’re faced with right now. Looking at, forgiving, even loving demons. Not condoning, but forgiving. Transforming. I really love this video.

PLOT: In the movie “Meteor”, a 1979 flick starring Sean Connery, Natalie Wood, and many other recognizable faces, the US and USSR must work together to destroy a huge meteor on a collision course with Earth. Total cold-war glory.

REALITY: We just witnessed the US and DPRK come together to forge peace in the face of a world mad with mistrust, deceit, and lies. The old world crumbles and a new potential enters the scene.

Prev 1 of 1 Next
Prev 1 of 1 Next
us, Everyman, the awakened you watching the screen. Karl Malden represents the ever-present Pleiadian guide and teacher. The meteor itself embodies the threat of evil. Brian Kieth and the lovely Natalie Wood are agents of Nemesis. I like to keep things interesting, and relevant, and was mulling over my options for pairing the powerful message with images and video clips. #pleiadian #ninespath Click To Tweet

The most intense writing period for the transmissions of the League of Light began in 2008 and tapered off somewhat in 2017. These messages were given and collected for discovery by a wide audience at a later time, when human consciousness was ready to fully appreciate and integrate the knowledge shared. Looking at them periodically, they become alive for the reader at the moment of connecting with them. However, as regards their wider dissemination, it really seems like now’s the time. I’m hoping to get more of these online, from all of the blog collections and from the books. So, at the end of last month, that process took off… again. You can, of course, find a lot of these messages in the YouTube library. I’m just revamping and adding more, and hoping that they will reach a larger audience (ahem, hint hint, please share!). Here’s the most recent, from the Changing Address collection, “Now We Come”:

Now, I’m not a big fan of the moon landing narrative. I just see too many inconsistencies with reality to buy into it wholeheartedly. That said, I made this video using footage from a NASA documentary on US and Soviet cooperation (a good week before I found the Sean Connery movie above), and it really deepens the message. See what you think. To me, the experience of this production is both deeply thought-provoking and intensely playful, disarmingly so.

Things are changing so fast, and there’s so much to do, it’s just a whirlwind of activity here. I have my eye on a few “old” blog posts to put on video, and I’m hoping to have time to get another voice transmission done soon. As I mentioned, if you’re interested in helping out the mission by transcribing any of the not-yet-transcribed voice transmissions, hit me up. And please share your favorite videos far and wide!

And leave your comments below. I’d love to know your experience.