A Moment in the Unicorn’s Path

Not all of the transmissions from the League of Light are written. Some come through the medium of drawing, as well. One of these drawings from years ago has always haunted me as a kind of map. I finally created an overlay from a real map to compare the lines, and the results are, if not surprising, interesting to consider, at the very least. Here, I’ll consider the outline of the map and the creature resembling a unicorn that sort of overtakes center stage. 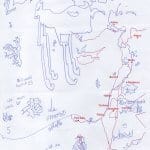 Click on the image to see it in full-scale glory in a new tab.

You’ll see 5s scattered around the drawing. In the Science of Nine, 5 has to do with creating form for reality; at the left-center of the picture, you can see the phrase “5 is world building.”

On the first day of 2013, I was inspired to get out a blank piece of paper rather than a notebook, and allow what would come through to come. As the lines jaggedly drew themselves through my pen on the paper, I thought, “This feels like a map, a diagram of someplace, some event, some… outcome.”

The map overlay (in red) does not perfectly match, but I have to say, I’m not an expert in geographical drawing while in altered states of consciousness… nor when I’m fully conscious. There’s no way I could get some crucial details of the lay of the land. There’s a big chunk of coastline missing and Greece is out of place, and the coastline of the Sinai peninsula is greatly magnified, but overall, the map overlay does seem to match up to the impression I was getting while the drawing was coming through.

Why is Lebanon missing, and part of Syria? Do the details, such as peninsulas or the placement of some of the squiggles, have significance in relation to events that have occurred in the area? There is an outline in red of Cyprus, and above it in my drawing a horseshoe-shaped island. I couldn’t find anything on any map to correspond… until I looked at the districts in Cyprus. Without Nicosia and Kyrenia, the shape match is near-perfect. Here’s what that looks like: 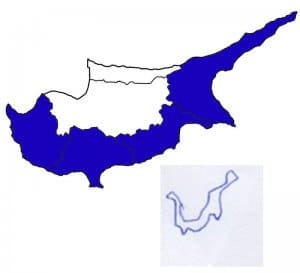 So you’ll see a “BOOM” in the area that would correspond to near Damascus, Syria. A sort of skeleton on the Red Sea, with its head on Suez. Is it rising from the Nile? Its “tail” seems to be planted in a splash of water, near the words “<3 is here”. A flower appears near Gaza.

I didn’t understand why there appears to be a giant unicorn galloping over the Mediterranean. Is it making a speedy escape from Turkey, Iran, or somewhere around there? I had to investigate, if only briefly, the significance of this kind of animal figure in the ancient Near East, because it triggered some remembrance of that era of artwork. Here are some images I found in a quick scan of the internet: 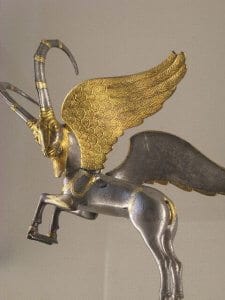 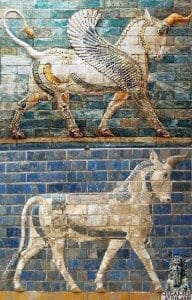 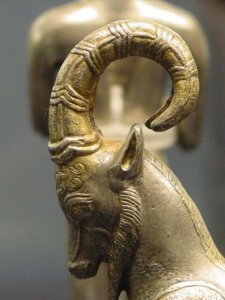 The figure in my drawing has decidedly a single horn on its head, though arguably seen from the side it could have two. While two-horned deer literally run rampant in the art of the ancient Near East, the unicorn doesn’t. It does, however, come up. In the Bible, for instance, where it is mentioned several times. Here are just a few instances:

“God brought him forth out of Egypt; he hath as it were the strength of an unicorn: he shall eat up the nations his enemies, and shall break their bones, and pierce them through with his arrows.” (Numbers 24:8)

“He maketh them also to skip like a calf; Lebanon and Sirion like a young unicorn.” (Psalms 29:6)

“Save me from the lion’s mouth: for thou hast heard me from the horns of the unicorns.” (Psalms 22:21) 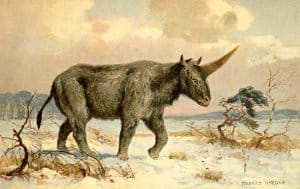 nteresting. Obviously, as these passages were not originally written in English, there’s some wiggle room regarding the number of horns. The word “unicorn” is only used in the older translations of the Bible, the Tyndale and King James. Were they referring to a rhinoceros, or perhaps the extinct elsamotherium? The latter seems to match Pliny the Elder’s description: “A very fierce animal called the monoceros which has the head of the stag, the feet of the elephant, and the tail of the boar, while the rest of the body is like that of the horse; it makes a deep lowing noise, and has a single black horn, which projects from the middle of its forehead, two cubits [900 mm, 35 inches] in length.” link

I didn't understand why there appears to be a giant unicorn galloping over the Mediterranean. #pleiadiandrawing #automaticart Click To Tweet 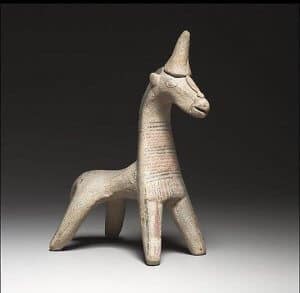 Further research yields this image of a horned horse from Cyprus. It’s not the sole example of such a statue. Look into the subject and you’ll find things like it. I was quite surprised to, anyway. link

There’s the Karkadann to consider, as well. This mythical ancient beast, whose name translates to “Lord of the Desert”:

The Karkadann was thought to be very fierce, shaking the ground when it ran and bellowing so loudly it scared other animals away. It was believed that the curved horn was used for self-defence, including against elephants and the straight horn could be an antidote to poisons. The weakness of the Karkadann was the call of the ring-dove, which made them docile. link 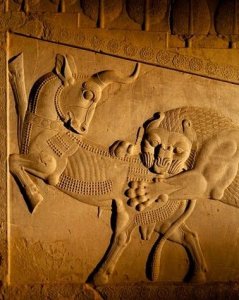 Further delving into the subject, one comes across pictures of lions attacking antelope in a LOT of ancient Near Eastern art:

Does this have any relation to the Lion and Unicorn? From an English nursery rhyme:

The lion and the unicorn
Were fighting for the crown;
The lion beat the unicorn
All around the town.

Nice to see no lion in the drawing, I think. Though, is that a gash in the creature’s side? Could be. Perhaps it has heard the call of the dove of peace and is on his way west to a new world. Anyway, it looks like it has escaped the jaws of death, hightailing it over the sea. 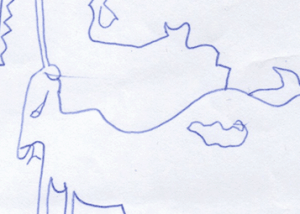 I’m sure there’s more to see by better-trained eyes than mine, and research that you are privy to. What do you see? Post your thoughts below.

Note: If you would like to become part of the support team for keeping this site up and running, and extending its light, please consider a monthly donation. Or buy me a coffee. Every bit helps me help you help the world. Thank you.