A Right Turn toward Tomorrow

Days of transformation are upon the earth now, with grand cycles coming to completion and a new era taking to forward movement. Finally, you may say, but death takes its time to be thorough in its work of preparing the way for the living. There is no shame, no guilt, nor excuses in the face of coming to rest from time’s allotment. There is only repose and relinquishment of the crown. What falls now pales in the face of what rises: life in its glory taking on the mantle of joy unremitting. Light finds new life now and you are called to carry it home. Turn and regard what has come before with enthusiastic vitality given release. The enormity of the hour cannot be denied. Rather, afford it the honor due. Let joy give rise to reverence to life’s decree, with all of time’s domains having come to order. 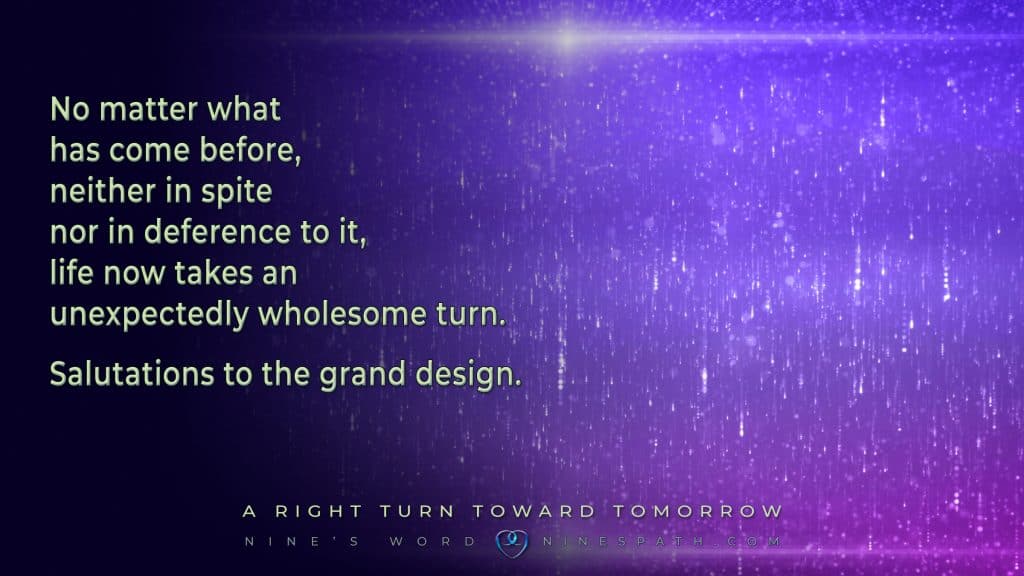 Death comes not with stealth or forewarning, neither to cast its hand in conquest nor retribution. Merely, it follows a course meted out by the thread of life itself. No ending comes without a beginning inbuilt, programmed to release the codes of life in accord with the music that sits within silence. Eclipsing the light of life may death pass, a moment that forever alters the fabric of the familiar. The light yet lives and waits for its radiance to echo back from where it finds root in the living. Grand cycles and small all know the signs of retreat and advance given by light-bearing bodies, which witness the footfalls and doings of those in their path. Thus does death dutifully follow the dictates of life’s measure, expressionless in its business, dauntless in its gaze. A grand cycle comes to pass. The honor of death’s standard juxtaposes the living light of life’s turn, and for the moment dominates the sky. Strict duty meets rose-colored starlight, kingdoms fall, the hope of those whose vessels had been tied to them fall as well. Old blood drains from lifeless forms, leaving aught but a ring of gold to attest to the effort given to a task now done. All is not lost, everything gained, for in the wake of the fall lay fertile fields ready for new life to burgeon forth. It is too late for the way whose time has passed. Death’s reckoning offers no judgment, while life’s promise offers no limits. Creation booms again in the passing of what has been laid to rest. Honor the fallen, and witness what comes to life in the field of joy revealed.

Triumphantly the ingress of light turns to set the spirit of life in a new direction. Behind it, the source of love’s radiance shines in growing magnitude, in blessing and in benevolent assessment of the way on which nascent joy is set. Fearless exuberance rides high, fully established in a seat of purity and power. A piece of the sky is in possession now, a symbol of the freedom that is the nature of this shift in elemental relationships. No matter what you find staring in your face, you carry the essence of bliss at your core. Let it come into form as a tiny thing, a daring thing, alive in life’s fields and free of all trace of dark shadows. Let this seed celebrate its piece of sky, its claim to life on its own terms, its individuated expression of enthusiastic joy. No matter what has come before, neither in spite nor in deference to it, life now takes an unexpectedly wholesome turn. Salutations to the grand design, duly offered, and the spirit of the age readies to emerge shamelessly joyful. And why not? What has been has been played out to the extent that no more can it be considered viable. If you find yourself suddenly moving into the light of a new day, situational awareness will give you the all-clear. Give yourself over to what’s happening. Death has had its day, and will move along its course per cosmic dictates. No more can it threaten what has now come to be. Claim it, seize the piece of sky that belongs to you, your hope and your triumph, and go, golden one. Crowns of light surround the scene.

The gates through which you’ve recently passed have brought you to your knees, as an initiation looms from above. Within the confines of your mental appreciation for what’s happening, that initiatory gesture may be just out of view. You know it’s there, somewhere, beyond where your mind can yet reach. For this moment, maintain your poise. You have survived, you have met yourself, you have been given much to bring into accord within yourself. The initiation handed to you has been earned. You bear no guilt nor burden of proof in the position you hold, other than to submit to the masterful hand of the keeper of mysteries. Your soul is well aware of the ritual taking place. While you ride into this sacred meeting-point with self-reckoning in absolute freedom and stripped of all pretense, the moment itself deserves a prayerful nod. Here you are, or soon will be, at the crux where the keys to the vault of your own knowing lay within reach. Before taking hold of them, hear the pronouncement of the timekeeper himself. Instructions come with possession of the keys, just as joy comes with holding the banner of freedom. A grand passage towers in perspective. A grand cycle merits entry with purposeful alignment on all levels of your conscious being. All things settle in perfect order. Eternal crowns once claimed and now relinquished find natural order upon the head of a timeless emissary of celestial wisdom. Heaven can yet find its place on earth. What an awesome manifestation.

“Creating a living dream is more a joy than a chore, particularly when you let it all happen on nature’s timetable. Life is nature’s specialty. Death is creation, too. Dying, however, is a specialty of man. Only man looks at a star and says it’s dying, when in fact it’s preparing for radical transformation. A star does not die, gentlemen and ladies of the scientific establishment. A star cycles constantly and then it jumps to another level of being unseen by your telescopes.”

Steady your mind on home, and let your mind extrude from the picture some extra dimension where love makes her appearance.#ninespath #zeropoint #pleiadian Click To Tweet
FacebookTweetPinYummlyPrintEmailShares31