Part Ways With the Lie

Can you bear the tension any longer? You hold yourself in position to cut through the bonds that hold you within a frame of desolate extremity. With you, you would bring the whole of humanity, and destroy the machine that repurposes life’s unfathomable beauty for its own ends. An intricate knot formed of countless tangles tests the sanity of the whole concept of life’s purpose and meaning. Slicing through its Gordian structure is less a matter of emotion-driven impulse than a stealthy inside job. Liberation lay in finding the way out of the chaos through love’s calculated ubiquity. It is there, unrevealed, waiting to spring the confinement of life’s irrepressible homecoming. Within you is the secret to untying what binds you. Remember what love has wrought in you, as you. 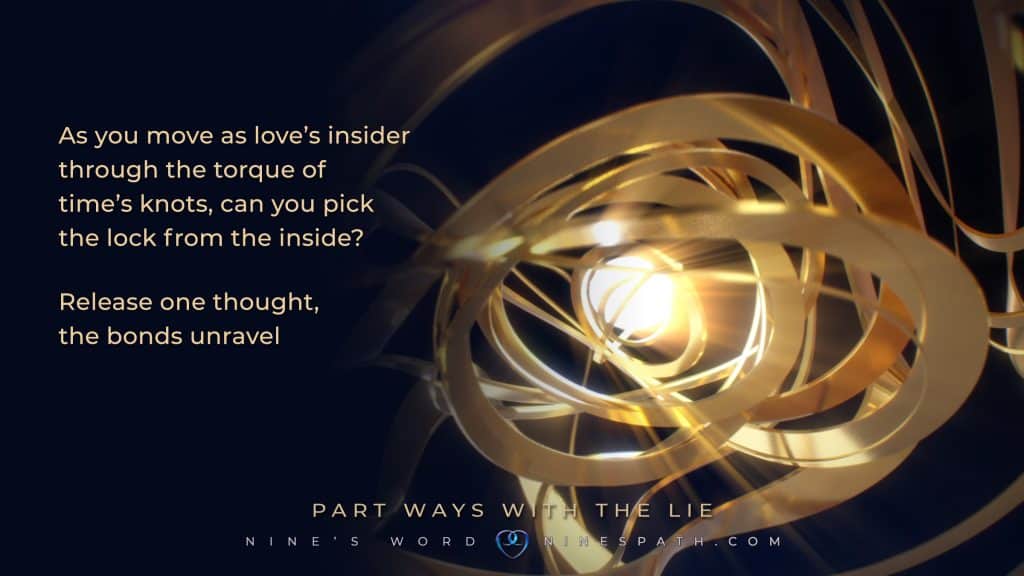 You stand poised, cheeks flushed with the hot blood of emotion brought to the testing point. What you see beyond the edge of your allowable perimeter of action has the fire inherent in it to bring your fluid mind to a boil. How can you break through the limitations that bind you, to give yourself the space to swing your arms with enough power to cut the cords that bind captive truth? For it is the truth of your being that lay just out of reach, wrapped in a concert of knots and entanglements of words, thoughts, and actions taken, preventing the full expression of all that you are, all that you know to be. With one well-aimed blow, you know you could cut through the mess and free what lay immobile within a mass of lies and untruths. What holds you back is not just a boundary imposed from outside. Rather, it is the dawning realization of everything your sharpening senses relay to your mind and your gut. Steady now, as the picture sets to reveal itself. Restrain the emotional storm as best you can by holding on to the central thought that steadies your hand and calms your mind. The picture is only partially revealed. Allow your rapt attention to come into focus. The full gamut of your awareness can take in the picture of desolation around you, and the gathered darkness that threatens to block the sun. In acknowledging what is, you more fully prepare yourself to move into what will be. Be sure you have brought the totality of yourself into alignment with the core force you feel coming alive within. Merge with your environment without losing yourself. Remember, you are love’s creation. So is what you’re about to see.

The inverse proportion of time and fortune come to naught in the factoring of love. This is the hidden constant that’s been mistaken for a variable. In fact, it has been the core operation throughout the myriad permutations of sense-making that have been at work. Because of faulty reasoning, perhaps, or because a specific answer was predetermined without reference to the inherent power of love’s manifest and unmanifest properties, there’s a mess and confusion about what’s really going on. A lie cannot be validated without the truth coming out. Despite the masterful attempts at making one thing mean another, the reality of what really is eventually renders all calculations to the contrary come to nothing. This is where things stand. A new approach to an old problem can turn the backward flow around and liberate the sanity that faulty programming is diverting from the absolute into which all eventually becomes. Where fortune has favored the hand of the few, a mathematics of infinity will prove a formula more germane to the nature of life. Where love has been absent, hidden, or canceled out, a reciprocity of reversals will reveal its undeniable consistency. It is the function of Six to draw the design of innumerability, to twist the fabric of sane understanding into knots and invalid answers. Nine unties all invalidities and verifies the answer as the irreducible constant of love. If you can see this, you are already participating in the undoing of the lie. In the function of Nine, you are a vital part of the equation. Be present with this understanding, and you will be part of the answer.

Nine will lead you into the space of fullness of mind and heart, self-recognition and unified endeavors coming to the reweaving of what time has tangled. What had been unknown or unacknowledged may hold a surprise turnaround. A surprise for you, perhaps, and to the benefit of a satisfying outcome, but known all along by your soul and your origin. The integrational act of self-reflexive love brings a splintered understanding into coherent patterning. Outdated motifs reshape themselves into legendary living, wherein you become aware of the fullness of your own aptitudes for life. What signals this re-comprehension of selfhood is remembrance. How much must be stripped from your identification of who you are for you to claim yourself as your own? In doing so, do you not also claim the true nature of being human, which in turn reinvigorates the whole organism that lives as an incalculably intricate play of variations on a theme? You, human, are heir to life’s fortune. Merge with this concept and know that you are as inviolable as a pulsation of pure intent of being. Endless iterations of experience culminate in every now. You have in your hands the treasure, in your blood the code to unlock the vault where it lay shimmering. As you move through the adventure of seeing things as love’s insider, turning tables and sliding through the torque of time’s knots, can you pick the lock from the inside? Release one thought and see the bonds unravel.

“In the land of love and peace, there are no wrong creations, only love making itself hidden, moving in shadows, laughing quietly at the loveless illusion the world believes is real. In the blink of an eye, love pours opalescent light over the darkest night and everything is transformed. On Nemesis’ chores love applies itself and slips in between the cracks of humans’ carefully crafted exterior personas. OM knows where every dent and ding hides. By pushing forward, OM keeps you from getting stuck in a space and time of more or less knots of energy.”

As you move as love’s insider through the torque of time’s knots, can you pick the lock from the inside? Release one thought, the bonds unravel. #ninespath #releasetheprogram #pleiadian Click To Tweet