In a world turned upside-down, you might be inclined to believe that all is lost. Yet an upturning of what was is necessary to see what had been obscured over the course of time. What had settled in place as the traditional workings of things now faces such a moment, without a doubt. If the final outcome is to be the investiture of the unconditional human, whole in power and undeniable in authenticity, press on. You’re called to take a risk and extend yourself beyond everything you ever believed. The matrix is crumbling. Every thought you turn toward acknowledging yourself, every word you utter that dismantles the vibrational underpinning of belief itself grants you access closer and closer to the reality you perceive with your heart. Time speaks in hushed tones, reminding you to step beyond the limits that a weaving of words has constructed. The dance you do now with the rising murmurs of your mind can untie the final knots, and allow the fullness of who you truly are to unfurl, and a world fully lit with it. 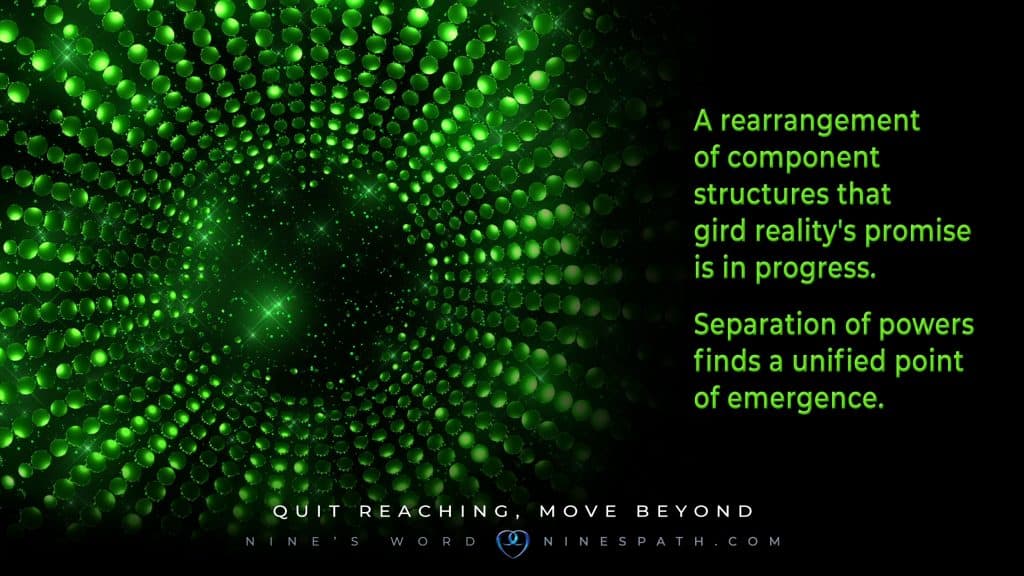 The keeper of the passage to the inner world has total authority to grant access, yet rests in accord with a grand design. It’s not that his authority is limited or curtailed, nor that it is absent from the entryway. It is, rather, in wisdom and with a plan he awaits the moment of decision. It is not up to the one who sits at the edge of the world to make a pronouncement on his own. Acting within the orchestration, he must also act outside of the dance, the drama, the spectacle. Watching, waiting, and maintaining a stoic silence has become a revolutionary mode of rulership of mind and heart. Witness now what spins in front of your own eyes, with a detachment sublime that allows for balanced wisdom to ground your feelings. Response rather than reaction calls for patience to win the day. Have you noticed a growing acceptance of your inner stabilizing mechanism? Are you growing to trust it, over the conditioned reflex to bark out a line from the age-old script of a dying play of powers? You need not say a word. You need not rely on what had been the mainstay of commerce, of ritual endeavor, of insular gradients of bargaining or traditions bereft of life’s discernible spark. All that time has wrought in the plain of existence belongs to you, unquestionably. It is yours to own and yours to grant clemency to in a clarified moment of stating the obvious. Before you take the ascendancy, check in with your mind. There’s no need to sabotage yourself any longer. See the truth for what it is.

A world of luxurious grandeur tantalizes frayed threads of awareness that work through the dense matrix of mind. Nearly can you smell it, aromas of reclusive soul whispers caught on the winds of time. Movements behind the screen stir deep memory. Latent wishes seem yet alive, but beg you to trust that the life deep in their roots is as strong as ever. Having given your own life force to tending an invisible garden, you may sense that, far from being dead, its code is speaking with nature’s sage wit. Beyond the edge of hearing, a rustling hints at this. Your own roots are privy to the communication that stirs underground. Given the nature of love, its undying fertility, its ingrained trigger that dwells well-guarded in the depths of your being, you cannot mistake the signal that rises from the deep. Busy your mind with those messages that alight unavoidable, softly begging your attention. What comes, see for what it is. What message is given, receive and gracefully release. Thus, transform. You are called now to respond to fleeting forms that come for permission to fly. Bit by bit crumbles the latticework separating you from wholeness of self, your soul’s endeavors, the verdant, lush garden of personal growth and sovereign attainment. You approach an integrative wholeness of what has been your workspace with what has been awaiting your engagement. The key lay not in unlocking one door, but in disintegrating the partition itself. One acknowledgment at a time will get you there.

In taking an assessment of the full picture now available, it’s understandable to fall short of appreciating the totality of what is set to emerge. World-weariness spills out into any number of expressions, none of them cohesive to another, none particularly useful in exclusion of fitting into something meaningful, sustainable, or even, at the least, realistic. When reality itself bears little resemblance to what you had hoped it to be by now, you can hardly be blamed for slackening your resolve just a little. Yet, wait. All hope is far from being lost. A rearrangement of the component structures that gird reality’s promise is in progress. Separation of powers is about to find a unified central point of emergence. That light of hope remains cordoned off for the moment, awaiting the final settling of elements of power in the dark corners. If you feel that understanding of this monumental dynamic of world-making is just out of your line of sight, don’t fret. Keep your balance. Stay immersed in your light, in your own energetic dance, in coming to terms with the mystery of selfhood that is building up its own internal dynamism before reaching a kind of critical mass. What you may not understand yet, from where you are now situated, is the magnificence of what is about to breach the threshold. At the center of a growing light is the human form. The individual having gained sufficient amplitude of self-appreciation to hold the light of divinity prepares to step beyond the limit. You are ready to begin.

“Apparitions neither alive nor dead roam your mind, suggesting one or another activation of the codes. Each time you respond to Nine’s high rate of vibration, your codes activate in the precise order of natural divinity and you, as a result, become more able to Nine yourself, ascending past outdated, lack-oriented realities. Certain pens brought out from Nine’s repertoire write cryptically, ‘Nine loves you.’”

A rearrangement of component structures that gird reality's promise is in progress. Separation of powers finds a unified point of emergence. #ninespath #unity #pleiadian Click To Tweet
FacebookTweetPinYummlyPrintEmailShares21