Hell Knows Its Own

Two days ago, I got the message to do a drawing, and upload it on Saturday. I had no idea it would be so appropriate for Halloween. 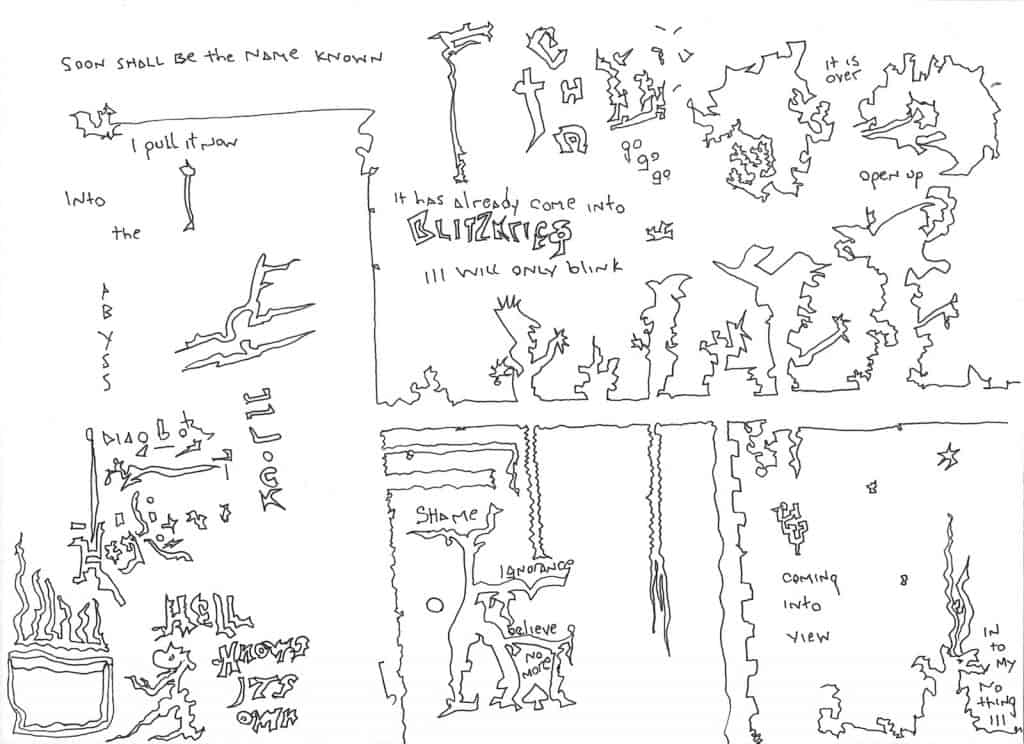 And I had a thought… if you’re drawn to color this in, please do! Get creative and post your versions in the Pleiadian Renegades Facebook group, or drop them to me on Twitter.

I’ll walk you through this drawing in the order in which the lines appeared.

The drawing began with a horizontal line (top left corner) dropping down and continuing to the right, outlining what appear to be four figures. I see a small, excited man (pointy hair, flailing hands) talking/yelling with a smug-looking taller figure facing him. Something is aflame between them. Then to the right of that, two figures facing away from them. The one on the right looks to me to be a larger, bolder, more energetic apparition of the one on the left. This one is also talking and gesturing.

Maybe they are saying “Trick or treat”?

Next came the square section, bottom right. I get the idea of bricks on the left side of this square, cracks (as in the ground) across the top. In the bottom right corner, a figure seems to be shooting flames upward, with the words “Into my nothing” and III next to it. An intricate shape sits above the words “Coming into view,” and some star-like shapes complete this section.

Next, I drew the figure at the bottom left corner. This has the shape of a little demon, with the outline words, “Hell knows its own” around it. The cauldron came last in the whole drawing. It’s steaming, and an extra outline around the whole gives it the sense of glowing red-hot.

Far above the cauldron, a tiny bat appears, tugging at the line as if it were a string it would unravel. Aptly, it seems to say the words, “I pull it now” while a disembodied arm points upward to the message. Above the string/line, the words “Soon shall be the name known.” What name? I suppose we shall see.

Next came the cryptic scattered shapes above the demon-figure. I have no insight into what these mean. If anyone can scry into that and glean insight, please feel free to share in the comments below or on the Pleiadian Renegades Facebook group.

Now in the center of the top section, you see the words “It has already come into blitzkrieg. III will only blink.” Does III signify WW3? If so, a blink sounds good. Perhaps it will be, as the League of Light has been saying, that the next war will be very short. Above these words, a shape… is it an airplane dropping something?

Moving to bottom center, came the word “Shame.” Then the tree-like figure, branches bare, (or maybe it is a rune? or something else?) then the words “Ignorance” and “Believe no more.” Finishing that are a spade at the bottom and a circle to the left.

Now looking at the top right corner, two shapes. The left one, could it be a map of Europe turned on its side? Maps are a frequent theme in these drawings. The shape to the right includes a giant arrowhead pointing to the left figure. Accompanying these are the words “It is over” and “Open up.” Then to the far left of the page came the words, “Into the abyss.”

Top center now, the shape like a cross seems to be a “t” with other letters scattered around. Does it spell “Then”? To the right of this, a small piece looks to me like two small figures on a sled of some sort, or maybe a speaker at a podium, with the words “Go go go” below it. There are a few single tiny straight lines and a square between this shape and the sideways-Europe shape, that look to me like squinty eyes, a nose, and a pinched mouth… without an outline of a face, this has the sense of an expression hovering, like an emotional ghost.

Now the pen settled at a point just below the corner where the first line dropped down and turned right to draw the figures. I drew a line to the right, then sharply down. This seems to be a root below the first figure, anchoring in “Ignorance”, and another appears dripping below the second figure. Pen moved back to the beginning of that line and draws downward, a series of shelves, then continuing down to complete that section.

What I see here is people standing on the ground, and two underground sections beneath them. Two different foundations. Just to the left of the separation between ground and underground is a pair of shapes that seem to fit together, with the word “Unlock” in outline form vertically below them.

A note on 5: This number appears very clearly on every picture I receive through these automatic drawing transmissions. In this picture, it is at bottom center of the page, with a long, exaggerated top half, stretched tall. In the paradigm of 9, which is laid out fully in the book Opalescence, 5 is the number of world creation, arrangement, organizing how you want your reality to be, reflection on how reality is manifested.

What do you see?

A new drawing from the League of Light. I had no idea it would be so appropriate for Halloween! Want to color this in? Please do, send it in and share. #ninespath #pleiadians #halloween2020 Click To Tweet
FacebookTweetPinYummlyPrintEmailShares40