From Draco to the Pleiades, with Love

A long time ago…

It was so long ago, that we first crossed paths. We were somewhat similar to your cats and your reptiles, but we were larger, more humanoid looking, and more evolved. However, there was fear in our eyes. We had to see at some point that we were not so different from each other. Yet, the fear and the stories of survival were greater than the conviction to find within such levels of empathy that could enable us to see that war and control were unnecessary. Then, as we all interbred between several species, the human template took shape to look more and more similar to the current Earth human template. We were no longer dragonoids with long snouts, large wings, multiple horns and thick scales. They themselves were no longer large humanoid felines. From Draco to Orion, to Lyra to the Pleiades, our forms approached just a little bit more, what the Earth human is, as a Cosmic template.

When you come across the term “reptilian”, you might cringe. When you come across the term “Draconian”, you might writhe. However,  there is much in the form of loopholes that humanity still has to understand about us, the ones who you have termed for too long, of the “darkness”. Not all of what we were back then was purely dark. Not even in those you term of “light” were so incorruptible as you were led to believe.

Many of you might still feel a conscious wound, related to the reptilian Cosmic specimens, of which I am part of. But in my currently incarnated Earth human form, I am learning, as my human aspect learns about us. Some of my human Pleiadian friends have been by my side in some way during my difficult integration to this human vessel, whether that is in spirit form, or in the form of long distance connection. I am One now with my Earth human form. I rejoice now to see this mutual sharing of paths, with my loved ones who were once part of opposing parties.

If there is something I learned about my beloved home world and my beloved Lyran-Pleiadians, is that we all had much to share with each other in peaceful and meaningful ways. But our cultural, social, economical, spiritual and even technological backgrounds, were difficult to reconcile back then. There was conflict in our own DNA. Now it is different, for we all spend our inner resources in the much needed healing of what once was not understood.

Yes, some of your current people in power still display the more typical traits of one or more aspects of dominant species. They are so full of greed and lust for power. Many of us had to learn some painful lessons on what it is to lose that love that we all crave, our inner capacity to love ourselves enough, to nurture ourselves enough, to lose potential friends and partners, and instead, devote our lives to the futility of war and the unfairness of larger institutions. Even worse, to the idea that darkness is needed. Why do you believe in such lie, that you need darkness? Darkness did serve many lessons, but let go of it now. You do not need it anymore. what you need is only balance and acceptance of the past, of any decision made, and the understanding of the root causes of conflict.

Interaction of Pleiadians with Draconians

I am Drakalyxen, Draconian female general of an invading fleet, who touched Pleiadian-Temmerian ground during times of greater strife, just when my Pleiadian family was still going through a process of recovery from older conflicts. My home world is located in the vicinity of Gianfar or Giausar, in the tail of the Draco constellation. While our more ancient Lyran-Draconian wars were over, the lessons were far from over. You can see the perspective of the Lyran-Pleiadians through the work of our friend Maryann, who channels Anica and of many other authors. I met Anica, back then, in that lifetime. I also met Asket. Things did not go as we wish they had ended, in perfect loving unity of some relevant species, including my Draconian kin. In fact, I met some of my best friends and my partner in Temmer, who were humans. Another part of my meaningful connections were part of the Draco regime.

I was devastated by these conflicts and wars. I was torn between worlds. My two reptilian hearts failed to continue feeding me with life force and strength as I lost my loved ones from both sides. Far from being a cold-blooded and cold-hearted abomination, as many of your speakers have labeled us, my two hearts opened so widely to accept love and healing from the Pleiadians. I had to go through much confusion in order to receive that light, for I did live a very painful life in my Draconian form. I had to teach to my brethren all that love that I found, but the collective problems and my own incapacity to assimilate everything that I had to learn, made the process an impossible one to complete. I did have very tough soulmates there, in reptilian form. But we were shaped in much by circumstances. I so wish that I had known how to transform all of those broken double-hearts and bring joy and light to the consciousness of all reptilians, programmed to feed and endure negativity, in one way or another.

Beneath the conflicts that took place physically in several star systems of our Galaxy, we are all good friends and even partners. My role is now one that contributes to the peace-making process on Earth. My new assigned mission through my physically incarnated aspect is to make sure that new genuine and lasting bonds can be created between intergalactic species. However, no such thing can be accomplished if we do not make peace first, with all our other incarnations.

Let me tell you how this works. For example, in my case as Drakalyxen, I am in the process of merging not only with my currently incarnated human aspect, but also with other reptilian and other human Pleiadian incarnations that lived in Temmer and Alcyone.

Recently, we had a very blissful and meaningful experience by the means of a spiritual merging that took place in this incarnated vessel as I became more integrated and more healed with a beautiful human-Elven form of Temmer, named Naeya. You could say she is like my counterpart, in the form of another incarnation of myself. Through her, I learn the perspective of the Pleiadians. As we become a collective of incarnations or aspects, it becomes easier for us to continue our mission and prepare to have more contact with individuals who are struggling to find peace in relationship to the reptilian involvement in the Galaxy. 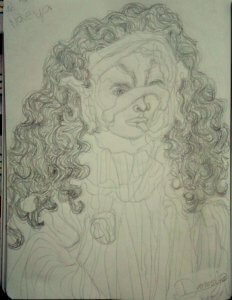 Collectively, we are not done yet with many of our Cosmic lessons, but much has already been accomplished in the areas of healing of ancestral timelines. The least we want to, is to perpetuate ancestral racial wars, based on difficulties of apparently incompatible species. On the contrary, many of us are here now, to close those gaps and shed new light to our Cosmic history. We will bring the much needed peace that we all crave at all levels, in one single planet. It will take time though.

After this process of merging of aspects or incarnations is complete, then we can assist in the elimination of programs aimed to perpetuate ancestral conflicts and fear of our reptilian species. Not all of us are interested in perpetuating domination and control of your planet. Far from it, we seek peace. Others are still behind, like many of the ones currently dominating in positions of power. Hold them in a space of forgiveness and compassion, for they will need it in their next incarnation as much as we have needed in our current healing process. Many of your starseeds who resonate more with the reptilian incarnations know this, and have been struggling with the negative information being spread. There is justification in this information and feelings, as we all need to heal these wounds collectively. However, we need to move forward towards the application of inner resources for our healing to be completed and for the values of forgiveness to be applied to our painful timelines.

Aim for the highest levels of love, and for those values that promote unity and kindness for everyone.

Karla Damarelya is an artist, healer and researcher in the area of natural resource management.

She began her awakening process through the vivid experiences of feeling and knowing the interconnectedness of individuals at the soul level since 2006 and the depth of harmony and disharmony in human relationships. Since then, having studied some basic healing methods, psychology and some notions from social and natural sciences, and amassed knowledge through her own spiritual practices, she has gained a greater understanding of the fundamental contribution of these disciplines and their deficiencies in trying to address individual and collective problems if we only approach them through the lenses of one or a few of these disciplines.

Instead, through a combination of disciplines she finds the inspiration to write about some of our ancient and modern individual and collective dilemmas, problems and lessons.